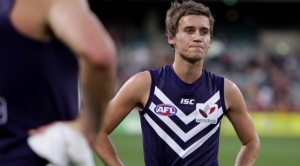 Round 10 of the AFL Home and Away Season saw the debut of three former TAC Cup players.

Jordan Schroder made his AFL debut for the Geelong Cats in their 65 point win over novices GWS on Saturday at Simonds Stadium. The tough midfielder was drafted to the Cats in 2010 and has since played some successful footy for Geelong’s VFL side.

Jordan gathered 11 disposals on Saturday and played a solid role in his team’s success.

Opponents GWS also had a debutant in Round 10, with Stingray Nick Haynes making his first official appearance for the Giants. The naturally athletic and agile player laid five aggressive tackles, demonstrating his determination to compete at every contest.

The Fremantle vs Adelaide contest brought about the third debut for past TAC Cup players over the weekend, with Hayden Crozier representing the Dockers. The aerial artist started the match as a substitute and later replaced Jack Anthony in the third quarter. Crozier was able to tally three disposals in the few minutes that he played. Unfortunately Fremantle were unable to knock off the flourishing Crows at Paterson Stadium.

The success of these three players in their respective games will be evident this Thursday when Round 11 teams are selected.