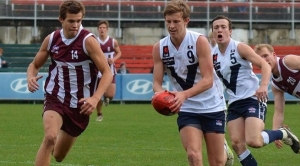 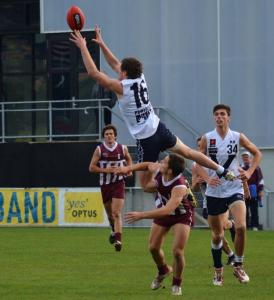 Visy Park played host to the second round of the 2012 NAB AFL Under 18 Championships on Sunday with a double header being played out on a cold Melbourne winters day as Joe Barresi reports.

Vic Country took on Queensland in the opening game while Vic Metro played Tasmania in the second game of the day with both Victorian sides starting the games as hot favourites. With a host of AFL recruiters and player managers in attendance, the pressure on players to perform was naturally intense.

While many AFL recruiting teams headed to the comfort of the warm corporate boxes to view the games, the Greater Western Sydney team consisting of Stephen Silvagni, Phil Scully and Graeme Allen braved the cold conditions to sit in the outer. With the knowledge that GWS will be having one of the first three picks at this year's national draft, much of their focus in the first game would have been on Vic Country's Lachlan Whitfield.

The midfielder/half forward has been touted for some time as the likely number one pick and the youngster certainly didn't disappoint. Whitfield was amongst the best on ground as Vic Country dominated against the Queensland boys, gathering 27 disposals, ten marks and three goals in what could only be described as a day out for the young Stingrays star.

Whitfield wasn't the only star for Vic Country with Bendigo's Oliver Wines (31 disposals and five tackles) and Geelong's Lewis Taylor (26 disposals, one goal) also prominent for the winning side. With the Country boys winning 15.15 105 to 1.5 11, it was no easy task finding a winner for Queensland, however Blake Grewar (20 disposals, ten marks) and Jordan Bourke (15 disposals, seven tackles) battled hard all game.