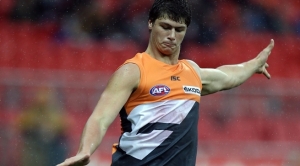 In wet conditions against Richmond, Jonathon Patton has blasted onto the AFL scene, showing flashes of his much publicised potential during his debut game on Saturday for GWS.

A former Eastern Ranges forward, Patton was selected as number one draft pick in 2011 by Greater Western Sydney, but experienced a delayed entrance into the competition due to knee surgery in January.

The 19 year old debutant demonstrated his magnetised hands by plucking the ball out of the air in a contested situation late in the first term. Within the minute, Patton took another strong mark which then resulted in his first AFL goal.

Patton finished the match with 7 disposals and 4 marks, with 3 being contested.

At 197cm Jon Patton promises to provide another strong target for the Giants' who are already reaping the rewards from Jeremy Cameron who was previously recruited from TAC Cup club the North Ballarat Rebels.

GWS teammate, Sam Schulz also made his AFL debut on Saturday at Skoda Stadium. Schulz was the first player to sign with the new GWS side after selectors noticed his explosive athleticism at the Murray Bushrangers. He began the game last weekend as a substitute and replaced Mark Whiley at three-quarter time, gathering 3 disposals with 100 percent efficiency and laying 2 tackles.