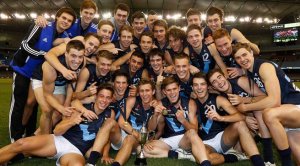 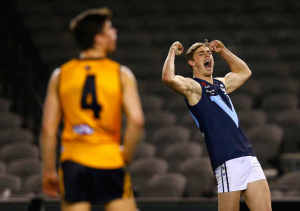 LEADING the celebration of Vic Metro’s NAB AFL Under 18 Championship triumph was an army of salivating Essendon supporters.

The Bombers fans had every right to be excited after Windy Hill-bound Joe Daniher (pictured), son of ex-Essendon player Anthony, provided a snap shot of his prodigious talent.

After being a late withdrawal from the match against Vic Country, Daniher treated all to a sample of his untapped ability at Etihad Stadium.

Daniher put on a marking clinic as he took a match-high 11 marks as he collected 16 possessions and capped his outstanding game with four goals as Vic Metro defeated West Australia 14.12 (96) to 10.12 (72).

He seemed certain to end with a bag-full of goals, but he went through a period in the third quarter where he kicked three points as well as kicking another out on the full.

The 18-year-old took made marking, especially in contested situations, look ridiculously easy as he took eight marks inside 50 metres with seven of his marks contested.

Essendon has already committed to drafting Daniher under the father-son rule. If not surely Daniher would have been the No 1 Draft selection, he was exceptional.

With Daniher putting on a show it appeared that Vic Metro would turn its final match against West Australia into a laugher.

After Luke McDonald and Tom Boyd both kicked goals inside the first three minutes of the third quarter, Vic Metro’s lead ballooned to nine goals.

But, an extraordinary transformation took over the match with West Australia climbing off the canvas to shake the life out of the Vic Metro players.

From the four minute mark of the third term when Jack Martin kicked the first of his three goals and Laine Wilkins put on a cameo with three goals of his own to the opening minute of the last quarter, West Australia kicked seven unanswered goals.

Vic Metro’s lead shrunk to 13-points and it could have been single digits had the visitors not squandered several set shots.

Just when it appeared Vic Metro may lose the unlosable, Christian Salem came off the interchange bench to convert and then Daniher squashed any thoughts of a West Australian revival with his fourth goal.

And, when Salem added his second at the 17-minute mark, Vic Metro sealed its Championship success.

Viney was relentless in his pursuit of the ball and drove the ball inside 50 a team-high seven times. If Daniher didn’t mark then Tom Boyd or Jack Billings did. Billings’ capped his game with three first half goals.

Boyd and Billings are bottom age players who will return next season as Vic Metro takes aim at a threepeat of AFL Under 18 Championships.

Both are outstanding talents as evident throughout a Championship where Vic Metro was without peer.