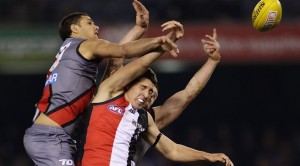 Arryn was selection 75 in the 2010 NAB AFL Draft. He was recruited from the Dandenong Southern Stingrays, with his junior club being the Beaconsfield Junior Football Club.

In 2010 he represented Vic Country in the NAB AFL Under-18 Championships.

“This year Arryn has dedicated himself to becoming professional in the way he prepares. So to receive a NAB AFL Rising Star nomination on the back of the work he has been committed to is rewarding.

“His capacity to play multiple roles combined with his elite kicking skills are highly valued. And with a continued focus on improvement we believe Arryn can develop into an extremely versatile player for the Saints,” he said.

The 2012 NAB AFL Rising Star will receive a personal investment folio and a dedicated personal banker, courtesy of NAB.

NAB will recognise the junior clubs that helped foster the early careers of the nominated players. Each of the 23 clubs will receive a NAB Club Recognition Award, a package of practical resources designed to assist them in developing future champions. Included this year is a life saving St John defibrillator as part of the St John Heart Start program.