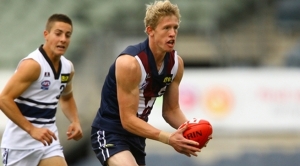 Round 17 brought about a major milestone for four former TAC Cup players as they each played their first official AFL game. Levi Casboult, Frazer Dale, Kurt Aylett and Sam Frost each made their AFL debut’s, representing their respective clubs for the first time.

Saturday evening’s clash between Carlton and the Western Bulldogs saw the AFL debut of two players for the Blues. Former Dandenong Stingray, Levi Casboult was thrown into chaos when all of Carlton’s ruckmen could not line-up on the weekend due to injury or suspension. The 22 year old was still making his return from a knee reconstruction having played one Peter Jackson VFL and one AFL Victoria Development League game when he was called upon by Carlton.

Standing at 198cm, Casboult held his own in the ruck against a dominant Will Minson. The final result paid credit to Levi’s work around the ground, running away with an 18 point win.

Teammate Frazer Dale also made his AFL debut that evening against the Dogs. Dale was recruited by Carlton in last year’s NAB AFL Rookie Draft with selection 50 from the Calder Cannons.

The attacking midfielder started the match as substitute and was called to the field in the final quarter to replace Dennis Armfield. Dale made the most of his limited minutes by kicking an influential goal for the Blues.

One debutant was former North Ballarat Rebel, Kurt Aylett who was recruited by GWS with a Pre Draft selection. He acts as an athletic midfielder for GWS with elite endurance who can run and carry to break the lines.

Aylett played just over half of his debut match on Sunday before being replaced by teammate Jacob Townsend, amassing 6 disposals and 2 tackles.

Sam Frost also made his debut for the Giants on the weekend. Frost was selected with the number one pick in the 2012 NAB AFL Rookie Draft from the Sandringham Dragons and remained the only selection taken from this rookie draft by the club.

At 194cm, Frost highlighted his athleticism and versatility against Fremantle, tallying 10 disposals with 80% efficiency. He also demonstrated his determination by collecting four 1 percenters.

Local Geelong Falcon’s boy, Josh Walker took to the field for the Cats in his AFL debut match against Collingwood at the MCG two weeks ago.

Walker was selected with pick number 23 in the 2010 NAB AFL Rookie Draft.

The 196cm key forward impressed coaching staff enough to receive a recall on Friday evening against Essendon. Walker amassed 12 disposals and kicked 1 goal in the Cats 67 point triumph over the Bombers.