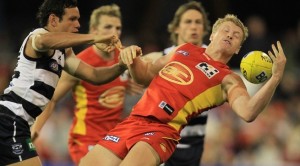 Josh Caddy from the Gold Coast Suns was the Round 16 NAB AFL Rising Star nominee.

A former Northern Knights Captain, Caddy was recruited by the Suns with selection seven in the 2010 NAB AFL Draft.

The 19-year-old midfielder experienced a frustrating debut year in 2011, delayed until Round 23 due to several injuries. However, Caddy has managed to play every match since his debut whilst showing maturity and leadership beyond his years.

Round 16 saw Caddy kick a goal and gather 15 disposals in the Suns’ nail biting two point win over Richmond in Cairns.

In the weeks beforehand, the up and coming midfielder gave Suns’ spectators a taste of what he has to offer by gathering 27 possessions against the Western Bulldogs and kicking three goals against Geelong. Caddy is currently averaging over 18 disposals a match and is proving to be a great asset for Gold Coast.