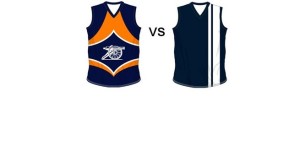 Round 15 of the TAC Cup competition will see two top eight sides go into battle at Highgate Recreation Reserve in an attempt to achieve their prime position leading into the finals campaign.

Third placed Calder Cannons take on the Geelong Falcons who scrape in at eighth spot on the ladder. The two sides both have aspects to gain from this encounter, with the Cannons looking to separate themselves from the five way tie they are caught in with Sandringham, Dandenong, Murray and Oakleigh.

On the other hand, the Geelong Falcons are craving victory in an attempt to push their way into this multiple team conundrum.

These two teams went head to head in Round 7 which resulted in a 42 point victory by the Falcons.

However, Geelong coach Andrew Allthorpe feels that this result does not hold relevance for this weekend’s contest.

“That was such a long time ago and both teams have changed and developed so much. So much changes over a season in the TAC Cup; our side has changed greatly positionally and personnel wise, as have they.”

With the Falcons only one win away from a potential top four position, Allthorpe will be concentrating on perfecting every aspect of their game to give them the best shot at success.

“We will continue to focus on how we want to play week by week, striving to improve in our preparation, game day and rehab/review.

“We believe we still have a lot of improving to do and the boys are really hungry to get the most out themselves and the group.

“We are really looking forward to this contest with Calder as they are always one of the bench marks of the competition and have some high quality players in their side,” Allthorpe said.

The Calder Cannons approach Round 15 having dished out a 45 point of the Bendigo Pioneers last weekend. The team were bolstered by returning Vic Metro players, however it was the existing list that stepped up on the day to create such a victory.

Unfortunately Thompson will miss this week’s game due to a hamstring strain sustained last round.

However, the Calder Cannons will be gathering further depth to their side this weekend with the inclusion of Joe Daniher and Jack Sheahan to the line up.

Allison took a lot from their last encounter with the Geelong Falcons and will be ready for another tough contest.

“After Round 7 I thought gee they’re a good side. We are planning for a different result this weekend, so we will have to be on a guard and watch the drive they get through their midfield.

“We were eaten alive by Sam Gordon last time who kicked six goals. We couldn’t find anyone to match him, but he is not playing this week which should alter the result,” Allison said.