Gippsland Back On Top 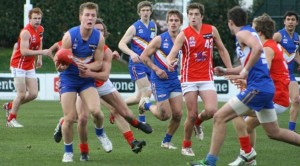 Having lost their previous encounter by 88 points, the Eastern Ranges took on Gippsland Power at Box Hill City Oval, looking for possible redemption. It wasn’t to be, however, as a tough contest saw the Power outfit triumph 12.11.83 to 7.8.50 in cold and sometimes wet conditions as Davis Harrigan reports.

The Power, who have usurped North Ballarat as ladder leaders with two rounds to go, were able to prevent the Ranges from taking the lead, but it took some doing. After running out to a 21 point quarter time lead, the Ranges pegged back four straight goals, including one from Scott McDonald launched from outside the 50m arc.

In the second quarter Power players Ben Vardy and Nicholas Graham kicked a major each before the main break. After half time, the Ranges only managed two goals, but the Power didn’t completely capitalise on the scoreboard. Although only seven tackles were laid in the second quarter by Gippsland, Graham, Tim Membrey and speedster Anthony Tipungwuti drove the ball through the corridor, while the Ranges usually looked towards the wings.

The Ranges, playing several younger and inexperienced players, didn’t let the Power romp away. It was the second quarter that showcased the Ranges talent. It was also a game where both teams gave turnovers and let the opposition transition the ball into their attacking fifty. Nicholas Graham and Tim Membrey finished with four goals each for the Power, while Jacob Zboril and Mitchell Honeychurch were the Ranges multiple scorers.

Power coach Nick Stevens, an ex-AFL player and also a product of the TAC Cup, stressed that the win was not their best, and the injury toll for the season would be telling come finals in two rounds time.

“It’s good to have a little bit of experience, having come through the TAC Cup myself probably helps. I think the boys relate to me and we all get along pretty well.

“We probably won’t look at this game again. It was always a danger game today coming up to Melbourne. We couldn’t drop any lower than 2nd, so the boys came up and got the job done. We made it to the finals last year but bombed out. I think our best footy this year is pretty good, and we could play off in a grand final.”

Ranges coach Darren Bewick, despite the loss, was very pleased with the team’s effort.

“The willingness to compete and have a crack is what we were asking for. If they play like they did today, hopefully we can win a couple more games. It was good that the boys stepped up.”

Next week is a development round, giving both teams two weeks off. The Ranges will next play Geelong at Simonds Stadium, while the Power will play Sandringham at Warrawee Park.