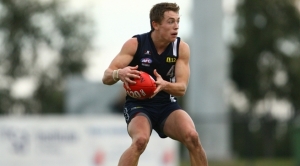 Devon Smith from the Greater Western Sydney Giants is the Round 19 NAB AFL Rising Star nominee.

The former Geelong Falcon was recruited by GWS with a first round selection in the 2011 NAB AFL Draft.

The 19-year-old midfielder made his official AFL debut in Round One and has thus far played 16 games in the 2012 season.

Round 19 saw Devon play an influential role in the Giants’ historic first win at Skoda Stadium against Port Adelaide. One of the Giants’ best, Devon provided the Giants with pace and agility, kicking two goals, amassing 21 possessions, eight marks and six tackles.

"Devon has enjoyed an excellent debut season and been a very consistent contributor. He is hard at the ball but has also shown in recent weeks that he is very handy around goal and this is a terrific reward for all his hard work," Sheedy said.

Devon Smith is the 16th former TAC Cup player to be honoured with a NAB AFL Rising Star nomination in 2012.