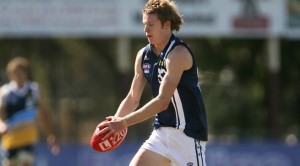 Former Geelong Falcon, Piers Flanagan made his much awaited AFL debut for the Gold Coast Suns last weekend against the Hawthorn Football Club at the MCG.

Piers was recruited by the Suns in 2010 as a 17 year old selection, however he had to sit out Gold Coast’s first year in the AFL due to a hip injury and consequent surgery.

The 189cm utility was able to push for senior selection this year after working hard to develop his physique.

Likened to St Kilda’s Brendan Goddard, Flanagan is an excellent use of the ball, working through the wing or half-back. In his first official AFL match on Sunday afternoon, the 20 year old amassed four kicks, five handballs and two tackles.

Flanagan showed a glimpse of what he has to offer when he represented the Suns in their inaugural VFL season in 2010. Playing at half-back flank, the Victorian demonstrated his hunger for the ball and ability to be a true competitor.

Piers is the first former TAC Cup player to debut for the Gold Coast Suns in 2012.