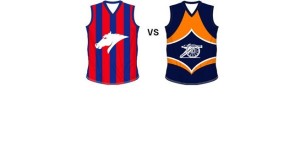 CALDER Cannons begins its sudden-death mission to add to its imposing TAC Cup history with an Elimination Final showdown with Oakleigh Chargers.

The Cannons quest to claim its seventh premiership in the past 12 years revolves around it winning every match it contests over the next month.

But, there's no point Calder looking any further than toppling Oakleigh, last year's Grand Finalist.
Both Calder and the Chargers square off after dropping their respective final home and away matches against Western and Sandringham.

The challenge for Calder coach Marty Allison is to turn around a second half slump that has seen the Cannons spiral from third at the mid-point mark of the season to seventh.

During the second half of the season, Calder owned a record two wins and a draw from eight games.

Admittedly, some of those losses fell during the AFL Under 18 Championships, but every team had to deal with losing quality players as well as juggling school commitments.

Included among those losses was a 16-point defeat by Oakleigh back in Round 12, but more recently Calder has suffered back-to-back thumpings by North Ballarat Rebels (75-points) and Western Jets (58).

What was particularly disturbing about the latest loss was that just 12-points separated the clubs at three-quarter time, but Western blew apart the match with a nine to one goal last quarter.

After kicking six century scorelines in the first nine rounds, Calder’s goal-kicking ability has dried up. Its biggest goal haul in the second half of the season is 13 goals.

Oakleigh is not without its own worries. The Chargers have dropped two of its past four games against Gippsland Power (51-points) and Sandringham (24) while its wins were against Bendigo and Northern.

Apart from a 20-goal haul against the Pioneers, Oakleigh has also found it hard to penetrate the opposition’s defence. Outside the Bendigo game, the Chargers other three recent games have realised just 20 goals.

Both obviously need to lift, but that’s one of the beauties of the finals – it’s a compact new season when every club starts from scratch.

One of the pivotal players for Calder is Joe Daniher, who created such a huge impression in the final AFL Under 18 Championship match against West Australia.

Daniher has the ability to take control of games and if he gets into full swing early in the game then Calder will be hard to stop.

The Cannons will also be looking for their Vic Metro players – Jonathon O’Rourke, Darcy Bailey, Rory Atkins, Matthew Dick, Liam McBean and Lachlan Plowman - to provide the leadership in such a crunch situation.

Young Jack Billings and Luke McDonald gained All Australian honours after their triumphant AFL Under 18 Championships and they will be keys to Oakleigh’s success.

Billings has played just the past two games with the Chargers, along with fellow Metro representatives Jackson Macrae and Kristian Jaksch, while McDonald didn’t play last round.

Calder needs to definitely improve, but history tells us that’s exactly what they do in September."