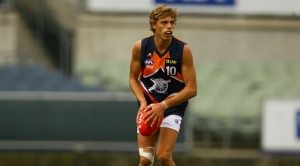 The last round of the AFL Home & Away Season often presents coaches with the opportunity to give young players a run to test their skills on the big stage and last weekend lived up to expectations. Three former TAC Cup players made their official AFL debut for their respective Clubs.

Merret was recruited from the Falcons in 2011 NAB AFL Draft with selection 31 to provide more pace to Essendon’s young midfield.

The tall midfielder demonstrated his great work rate and ability to break the lines on Saturday, whilst amassing three disposals, four tackles & and two one-percenters.

Tom Sheridan made his official AFL debut for the Fremantle Dockers in Round 23, defeating the Demons by 61 points at Paterson’s Stadium.

Sheridan was recruited from the Calder Cannons with selection 16 in the 2011 NAB AFL Draft.

The versatile midfielder was named as a substitute on the weekend, consequently replacing Luke McPharlin in the third quarter and delivering five disposals during his time on the ground.

At 18 years of age, Sheridan has been touted as having a bright future at the Dockers, with his elite endurance being well suited to the magnitude of Paterson’s Stadium.

Former Calder Cannon, Luke Mitchell was the third player to make his AFL debut in the last round of the season. Mitchell was recruited by Carlton in the 2010 NAB AFL Draft with a second round selection, number 42 overall.

The athletic key forward represented the Blues for the first official time on Sunday in their 15 point loss to St Kilda, amassing eight disposals and booting one goal. Carlton holds high hopes for Mitchell as a much needed attacking tall target in their forward line.