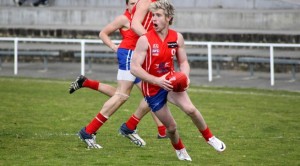 In a tight vote count, Graham claimed two votes in the final round to give him the lead and the win on 17, one vote ahead of North Ballarat Rebels’ Nick Rippon.

The Morrish win adds to a big year for the Gippsland Power midfielder, having represented Vic Country earlier in the year at the NAB AFL Under 18 Championships, and next Saturday he will attempt to help the Power into the TAC Cup Grand Final with Power playing in a Preliminary Final.

Graham polled three best on grounds, and more importantly polled in three of the last four matches to win the Medal in a season where he averaged 25 disposals a game. He was also named at half forward in the TAC Cup Team of the Year, and was equal third in the TAC Cup Coaches Award behind winner Jake Lloyd from North Ballarat Rebels.

Other Award winners on the night included:

(Awarded annually to the player who is deemed by her peers and coaching staff to have made the most significant contribution to the Victoria U18 Youth Girls team at the AFL National Championships.)