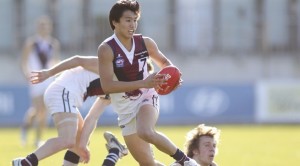 ONE of football’s most pressing questions is the ability to rebound from adversity.

Sandringham found itself needing to address such a situation after North Ballarat snatched a thrilling win in the Qualifying Final a week earlier.

The Dragons delivered such an answer in emphatic fashion when they ended Geelong Falcons season with a 25-point win in the Semi Final, 11.12.78 to 7.11.53.

Significantly, Sandringham was able to take control from the outset and just as importantly at no stage did they open the door to allow Geelong to come back.

The Dragons set the tone for the match with its four to one goal opening quarter.

Sandringham increased its lead in each of the first three quarters – 16-points at quarter time, 19 at half time and then 27-points at three-quarter time with Geelong only able to make marginal inroads before the final siren.

While the Falcons pounced early against Murray Bushrangers in the Elimination Final they were not allowed to take charge in the Semi Final.

After blitzing Murray with an eight goal opening quarter, Sandringham didn’t allow Geelong to kick as many goals for the entire match.

It was that intense tackling pressure and harassment from the Dragons that kept the Falcons in check and resulted in the scoreboard not registering much Geelong activity.

Sandringham has lived on its ability all season to close down its opposition. Significantly, the Dragons have not allowed a rival to kick more than 10 goals in its past four games.

And, just has been the case all season, Sandringham success was built largely on all its players playing a role and sticking to the team structures and game plan.

Tom Langdon and Cameron Banfield played arguably their best games all season for the Dragons, which, as usual, were well served by captain Chris Mangoni, Kenny Ong and Christian Salem, who took 15 marks.

Too few Falcons were called upon to do too much and in the end Geelong paid the ultimate price while Sandringham kept alive its hopes of defending its premiership crown.