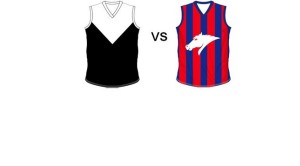 2012 Minor Premiers the North Ballarat Rebels sit one win away from a Grand Final berth with the Oakleigh Chargers their last obstacle to overcome.

The Rebels have produced an extraordinary season, spending 11 of the 17 home and away rounds on top of the competition ladder. Their impressive form continued into the finals when they defeated the Sandringham Dragons to travel through to this weekend’s Preliminary Final automatically.

Coach David Loader believes the maturity his side demonstrated to produce a five goal final term and consequently hold on to win by two points will provide his team with an invaluable strength.

“I think the win against Sandy will give the boys great belief in their ability to fight out tight contested games. It was a great effort to come from behind and win.”

If a Grand Final appearance isn’t enough motivation, the Rebels have extra inspiration to beat Oakleigh due to the Chargers knocking them out of the 2011 finals series in a first week elimination match.

Loader believes the match will be a tightly contested battle and a great spectacle for onlookers.

“The two sides this weekend have a lot of similarities, hard running ball carriers that can win their own ball. Oakleigh are a very good even side that we will need to be at our best if we are able to win.

Key forwards will be the deciding factor I think.”

Both North Ballarat and Oakleigh have no notable changes to their line up with an existing healthy list providing them with a near full strength side for the weekends clash.

The Oakleigh Chargers have hit the peak of their form at the business end of the year. Finishing sixth on the ladder at the conclusion of the home and away season did not hamper their determination, disposing of the Calder Cannons and Dandenong Stingrays in sudden death finals.

Justin Wenke, coach of the Oakleigh Chargers, has been impressed with the teamwork displayed in recent weeks.

“I think the most pleasing thing to see is our player’s willingness to share the ball and bring each other into the game. Our team is very coachable and the players listen to instructions really well. We have had a strong focus on our ball movement and style of play which would look very attractive to watch. Our group has developed strong cohesion, unity and spirit during this finals series.”

In their past two games, Oakleigh has recorded the highest score line for competing teams. This has been supported by the numerous and varied goal kickers they have on the field.

“We believe our strength is our versatility by being able to shift players through different areas of the ground. I think our players are working hard to create other opportunities for teammates to score hence the multiple goal kickers and big scores during the past two games.”

Wenke has a clear indication of what his side needs to perfect on the day for success.

“I think the team that can do well in the following areas would probably win. Contested ball, Clearances and effective inside 50 entries,” Wenke said.

Entry is free, Records on sale for $3