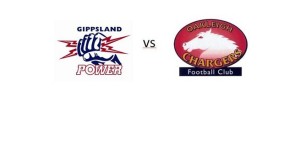 The best Victorian Under 18 side will be determined this Sunday when the Gippsland Power go head to head with the Oakleigh Chargers in the 2012 TAC Cup Grand Final.

Both sides have reached the heights of success with a first year TAC Cup Coach holding the reins. Past AFL star Nick Stevens has led Gippsland Power to success with his holistic coaching methods in a competition that can sometimes be viewed with the individual in mind.

“Our boys this year have really taken on board the team first aspect. We sort of spoke about it early in the year and I said if we play as a team, we will be more recognised at the end of the year and go further and it has worked out so far. We have made it to the finals and are now playing off in a Grand Final,” Stevens said.

In saying that, Gippsland’s Captain Tim Membrey has been a shining light in the team’s success. The powerful forward has had the opportunity to showcase his versatility around the ground during the year whilst demonstrating maturity beyond his years with leadership skills.

“His game on the weekend was first class and yeah he kicked the eight goals and I’m sure everyone would say it was an outstanding effort, but I thought more about his chase and tackle and how he led from the front with the boys. It’s just the little things he does through the game, he grabs boys and talks to them during the match and gets around to each of them at training.”

Stevens holds a lot of respect for the Oakleigh Chargers and the depth that their side possesses.

“They have a lot of quality players that are playing great footy at the moment. I think that is the strength of the Oakleigh Chargers. They have got 15 guys that are really playing outstanding football. The way they move the ball is first class and they remind me a lot of how Hawthorn play, their skills and how they use space,” Stevens said.

The Chargers enter their second Grand Final in as many years, hoping to go one step further in 2012.

Coach Justin Wenke cannot find many similarities between this side and the team that lead Greg Doyle into their big game last year.

“Totally different group, I don’t think there was one player on the weekend that played in last year’s Grand Final. So there are new opportunities and we have some really strong bottom age players that are getting competitive with our top agers.

“We think we have got a pretty even group this year heading in the one direction with one common goal.”

Wenke is pleased with the way his side has been able gel throughout the season and even more so in recent weeks.

“We have had an exceptional finals campaign. We have a great spirit and cohesion amongst the group. We are probably different to the other regions as we are so affected through the private school commitments of our players. We are proud that we have been able to play 63 players on our list this year and it is great participation for kids in our region.

“I suppose over the last month we have been able to gain some consistency of the same kids playing each week.”

However, the Chargers know they will be facing a side that has only dropped three matches in an entire year of football.

“They are the number one team in contested balls, clearances and tackles in the competition.

“We will have our work cut out for us but I have complete faith in my side,” Wenke said.