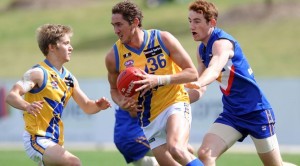 In the standing vertical jump, White recorded a leap of 82cms, which was 3cms behind the new Combine record of 85cms recorded on Tuesday by North Ballarat VFL player Dean Towers. Towers record jump beat the 15 year record held by Trent Croad of 83cms.

Click HERE to view interviews from Day 1 of the Combine