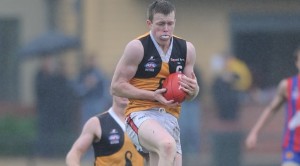 The final chapter of the Dandenong Stingrays 2012 TAC Cup season was the annual vote count and presentation night which was held at the Dingley International Hotel, Dingley on Friday 5th October 2012 with 35 players polling votes, 17 of those being bottom age players.

The vote count saw ultra consistent dashing midfielder Tim McGenniss awarded the newly established Justin Leppitsch Stingrays Best and Fairest award for season 2012. 18 year old McGenniss established himself as a top line TAC Cup midfielder come forward with his strength in the air, run and carry and precise foot skills making him a draftable commodity as he headed to the recent NAB AFL State Combine at Etihad Stadium in Melbourne.

McGenniss polled in 9 out of 18 games averaging 5.944 votes per game played for a total of 107 votes to win by 25 votes from hardnosed top age player Jason Pongracic. Pongracic played in 11 of 19 games for the Stingrays this year, as he juggled AIS and Vic Country duties along with injuries. Pongracic was awarded the Chris Newman runners-up Cup after polling a total of 82 votes and averaging 7.455 votes per game played.

Third was the ever reliable Robert Hill who progressively enhanced his standing as the year went on. Hill polled 77 votes in 13 games from a possible of 18 at an average of 6.077 per game. Hill also won the same award in season 2011 polling 86 votes in 15 out of 19 games. Hill was again the unsung hero who flew past a field of 6 in the remaining two rounds, where he was moved up the ground as a high half back flanker, to finish in the top 3. The third best and fairest award was also named after a club great in Adam Ramanauskas.

Key forward/defender Matt Rennie won Graeme Yeats’s Coaches Award for dedication and selflessness. Matty played a utilities role in 2012 collecting 168 contested possessions for the year, as well as taking the most contested marks for the club and coming 3rd for the entire TAC Cup competition.

Ryan Marks-Logan was awarded the Most Improved Player after cementing himself in the side on the back off numerous individual match winning acts throughout the season. Ryan’s aim for the year was to play at least one game for the club after coming off the Rookie list in 2011. He established himself as a high half back running player who moved further down the ground as the season progressed, finding himself in the forward line at times to stretch the opposition.

Ryan Morrison was awarded the Most Dedicated Trophy through his diligence, dedication and perseverance to games, training and off field workloads to improve himself as a key position utility player. Ryan played games for Vic Country and was used a key in forward and defence.

Nathan Foote won the inaugural Young Gun Award which recognizes a bottom age player who contributed well above expectations. Nathan played in 18 out of 19 games as a hardnosed small back pocket polling 58 votes and finished 7th in the count. Foote and will be looking forward to 2013 to step up and be an A-Grade TAC Cup Backline/Mid-fielder and aiming at representing Vic Country.

18 Year old Lewis Pierce won the trainers award for his efforts to overcome his long battle with knee tendinitis and growing issues. Lewis went to great lengths to get his body right, including spending time in Hydro therapy and getting blood injections into the knee. The club also recognised long serving football administrator Bev Chalmers for her work with the CMV Truck and Bus Under 16 squad with the prestigious Club Person of the year.

To top the night off 2 other Stingrays staff were recognised with their long serving effort of 20 year service awards in:

Bob Riddle, who started as the Team Manager for the Under 18’s and went on to coach the under 16’s in the school boys competition as well as stints as assistant U18 line coach to today’s role as bench coach/Boardman. Bob has also just completed 20 years as President for the Outer Southern Region Football Coach Association, which we believe is the longest serving President in Victoria.

And long time serving U18 Team Manager Peter Bainbridge. Peter has also been an Auskick District Manager in the zone for 20 years, as well as 18 years service to the NAB AFL draft state and combine.