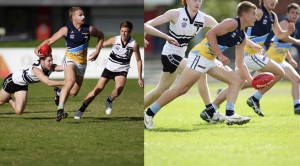 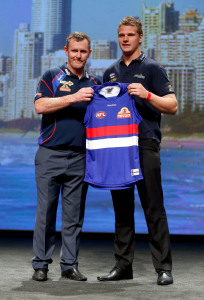 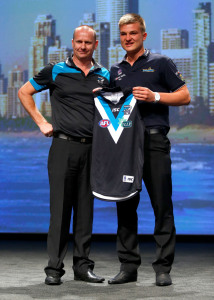 Bendigo Pioneers have enjoyed their best year at the AFL Draft since 2009, with two players drafted last Thursday night. What was even more pleasing for the Pioneers was the fact that their two draftees – forward Jake Stringer and midfielder Ollie Wines - were both selected in the top 10 at picks five and seven respectively.

Bendigo Pioneers Talent Manager Ray Byrne said the draft results were great not only for Bendigo, but for the TAC Cup competition as whole.

“It is a great result for the TAC Cup with 8 of the top 10 from the competition.”

Byrne was pleased to see two Pioneers rewarded for their seasons with AFL selection.

“Jake (Stringer) is a big strong key position player who can also pay in the middle.

“Ollie is a strong inside team player who can play in a number of positions,” Byrne said of his two Pioneers draftees.

Both players featured in the 2012 TAC Cup Team of the Year in the centre (Wines) and on the interchange (Stringer) and were part of AFL Victoria’s AFL Country Academy.

Western Bulldogs Recruiting Manager Simon Dalrymple said he sees Stringer as more than a forward option for the Bulldogs.

“He is also flexible enough to go through the midfield and win contested ball.

He suffered a well-publicised injury to his leg, but we’re confident that under a full-time professional football program, he will be able to play to his full potential.”

Port Adelaide National Recruiting Manager Geoff Parker was surprised to see Wines still available at pick seven, and had no hesitation in selecting the Bendigo midfielder.

“Wines is going to be a very good player for us ... he is a strong bodied midfielder ... he is around 90 kilo’s so in terms of that young body shape, you are normally bring blokes in at 70 kilo’s so he does not have to put on any weight and he is a tough contested ball player the way he is built.”