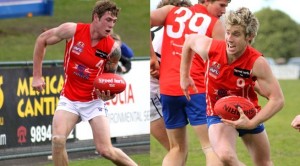 After a successful 2012 TAC Cup season where a number of players developed into elite footballers, there was an air of anticipation on AFL draft night for Gippsland Power. Would there be more young men to join the long list of players drafted to the AFL from Power? Kate Mitchell reports.

Captain Tim Membrey and Morrish Medallist Nick Graham were listed as early selections by various media phantom drafts, justifiably so given their consistent form and hard work on the training track. Will Hams, Ben Kearns and Josh Scott were also in contention after solid performances for Power, Vic Country and in testing at the national draft combine.

With so many variables coming into play with the AFL clubs selections, it’s always hard to know what will happen. After a nerve wracking wait through the early rounds of the draft there was finally good news for Power.

Tim Membrey was selected by the reigning premiers the Sydney Swans at pick 46. When asked how he felt hearing his name, the selfless Tim was thinking of his best mate Nick Graham and surprised that he still hadn’t been picked. “I didn’t know how to react when I went at pick 46 and Nicky still hadn’t gone yet. My heart just dropped, I was so excited but then again I just wanted my best mate to go too”.

He didn’t have to wait long with Nick Graham selected at pick 54 by Carlton. An elated Nick struggled to find words to describe the moment he heard his name called out. “I am just over the moon to get an opportunity, I can’t really put it into words what I am feeling. “

Nick was just as pleased for his mate Tim.

Nick is a shining example of hard work paying off, surprising even him as to where that hard work had led to.

“After last season I got dropped for the finals and I think there were a few doubters. But I just trained extremely hard over the preseason break and put a lot of work into my game. So to come this far no one would have picked it, I didn’t even pick it myself! But I just thought I have got to give myself the best opportunity and I did that and now I am reaping the rewards”.

Pleased to be staying close to family and friends, Nick is looking forward to meeting his new team mates.

“Carlton is a big power house club of the AFL which is good, they have big standards. I just want to get down there and learn off the best, Mick Malthouse and Chris Judd, you can’t really get much better than that”.

When asked what the Carlton fans should expect from him Nick said “just a hard working disciplined kid, someone that will give 100% and hopefully be a leader of the future, and hopefully come in and have a big impact next year”.

For Tim the night didn’t play out as expected by he was still ecstatic. “I had seen a few of the mock drafts, I actually thought I was going to go a little bit earlier, so slipping I was getting a little bit nervous, but in the end I am just so happy to get on to a list. I can’t wait”.

With the Swans recognised as having the best club culture in the AFL and legends of the game such as Adam Goodes at the club, who wouldn’t be excited to go there. But it’s not just being a part of a successful AFL team that Tim is looking forward to.

“The weather is going to be good, the beaches there are really good, but I know there is plenty of hard work ahead but”.

Tim has long looked up to Sydney player Ryan O’Keefe. “He’s the type of player that I’ve tried to model my game on. He’s a hard working forward that has the fitness to go on ball. We are around the same height as well. I’m going to follow Ryan around and just try and do everything he does”.

When asked how he thought his mum would cope with her boy moving to Sydney Tim had a laugh saying “it will be a good thing to get away from mum”. But he then went on to acknowledge how supportive his family had been. “Mum has always been there for me, and just to see her son get a crack at it she is wrapt. Mum and Dad will continue to support me”.

Power coach Nick Stevens could relate well to his players that had nominated for the draft. “It doesn’t matter what number you go, as long as you go”. Wise words from a coach who had gone through the process himself, drafted from the Northern Knights to Port Adelaide.

While elated for his players that were drafted, Stevens was devastated that more of his players didn’t get the call up to a senior list. With only 66 live picks used by the clubs, and only 33 of those picks being TAC Cup players, this year’s draft was quite different to the abundance of picks of previous years.

A number of Power players are now contenders to be picked up in the rookie draft on December 11. But with the AFL rule changes cutting the amount of rookies per club from 6 to 4, the competition for spots will be fierce. With three of this year’s draftees coming from the VFL, it’s certainly not the end of the line for those Power players still chasing their dream of becoming an AFL player, it’s just the beginning.

After the draft all clubs were asked to comment of their draftees. Sydney Player manager Kinnear Beatson was pleased Membrey was still available with their pick 46.

“In the end we just thought it was a bit of a Lukie Parkier sort of story - 'what is he doing here still?' Where he will play? We don't know but what we do know is that he can kick goals, he doesn't miss and he is competitive.

“The challenge for Tim at 190 centimetres will be trying to learn to play a bit of a different role a bit more higher up the ground.

“Coached by Nick Stevens and he's been a good player for a long time. I know it's a draft day cliché, but we were a bit surprised that he was still available for us to select.”