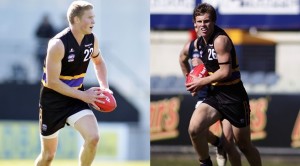 The Murray Bushrangers have had a productive record at the AFL Draft over the years, producing at least one draftee to the AFL in every year since they joined the competition in 1993. 2012 was no exception, with two Murray players having their names called out on draft night, with Tom Clurey and Josh Pruden both selected by Port Adelaide and Western Bulldogs respectively.

“Draft day is always a day of mixed emotions, but we are really excited for Tom and Josh.

“Having our 2011 Best and fairest winner Jack Crisp elevated off the rookie list at the Brisbane Lions, and 2006-07 team member Dean Terlich drafted by Melbourne from Norwood certainly added some more pleasure,” Carson said.

“We have a great football region to work with and look forward to firstly the Pre-Season and Rookie Drafts later this year where we hope a few more players will get their chance, before backing up with another group of talented players in 2013.”

Speaking about each of his draftees, Carson had the following to say.

Tom Clurey: “Tom has had a great two years at TAC Cup level, which included all five games for Vic Country at the NAB AFL Under 18 Championships this year.

“He has played as a key defender for the most of the 2012 season, but has the ability to play forward also. Tom reads the game really well, is strong in aerial contests and has a good skill level,” Carson said.

“His testing at the NAB AFL Draft Combine highlighted Tom's outstanding athletic ability where his aerobic testing was a standout feature. Tom has played in all sectors of the talent pathway, including Under 15 Schoolboys, Bushrangers Under 16, TAC Cup and Vic Country at both Under 16 and Under 18 levels.”

Josh Prudden: “Josh has combined the past two TAC Cup seasons with the Bushrangers with his commitments to his school football at Assumption College. Whilst his time in the Bushrangers has been limited, Josh has shown he is a terrific inside midfielder who has clean hands and makes great decisions with the ball, especially under pressure,” Carson said.

“Josh tested very well at the NAB AFL State Screening Day, with his aerobic testing combined with his ball winning and skill level showing that he is capable of playing in the midfield at AFL level. Josh played in the Under 15 Schoolboys, Bushrangers Under 16 and TAC Cup teams.”

After the draft, the AFL clubs had the following to say about their Murray Bushrangers draftees.

Geoff Parker, Port Adelaide national recruiting manager, onTom Clurey: “Tom's a key defender who had a very good year for Murray Bushrangers and Vic Country. His testing results at the draft combine were outstanding. He can shut-down opposition key forwards, but also give you a bit of drive from the back half.”

Western Bulldogs Recruiting manager Simon Dalrymple onJosh Pruden: He's from the Murray Bushrangers and Assumption College, coached by Scott Wynd, so there's a Bulldogs connection there. He's a midfielder with really good endurance. He's had some injuries, so he only played seven games for Murray. Because of his limited preparation pre-season he was on and off the ground a bit, but when he was on he just kept on getting the ball. He's really good around the contest and he's a humble, hardworking, ripper kid.”