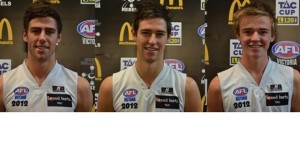 North Ballarat Rebels continued their trend of having at least three players drafted each year since 2006, with Michael Close, Tanner Smith and Martin Gleeson all joining the ranks of the AFL at the November NAB AFL Draft.

After a successful season finishing as the minor premiers and making it through to the preliminary final, the Rebels were once again rewarded on draft night.

The three recruits on draft night takes to five players from the Rebels that will be added to AFL lists for next season, with Jake Neade and Dom Barry both already named as pre draft selections by Port Adelaide and Melbourne respectively.

Phil Partington, AFL Victoria Talent Manager for North Ballarat Rebels, believes the regions successful season on the field has been reflected so far at the draft.

“Keeping in mind we had two players recruited in the pre-draft, we are very happy with how our region has performed this year.

“To have five players picked up before the Rookie or Pre-Season Draft in a region that doesn’t have a high population is fantastic.

“The boys have sacrificed a lot and to finish Minor Premiers as well has capped off the year nicely.”

Two of the three Rebels draftees will be heading interstate, with only Gleeson remaining in Victoria head. Partington gave his thoughts on each of his NAB AFL Draft selections.

Michael Close: “Michael had an interrupted year. His first half of the season was fantastic but after he injured his ankle it affected his Nationals campaign. At 197cms, Michael demonstrates elite endurance for his size and will shift into the AFL system very successfully.”

Tanner Smith: “Tanner has a very high work ethic and an impressive closing speed. At 196cms he is likely to become an influential AFL footballer.”

Martin Gleeson: “Martin is a developing player that in two to three years will be at his best. He has the awareness and tricks to go further.”

Each of the AFL clubs also had their say on each of the Rebels players they were lucky enough to secure at the draft.

Brisbane Lions National Talent Manager Rob Kerr on Michael Close:"Michael Close is 196cm and is really a centre half-forward. There are a few rough edges we'll try to knock off him over the next few years, but the thing in Michael's favour is that he's very competitive and that was the thing that probably stood out for us.

“He's going to be a project player, but we need to start looking beyond Brown. We need to find players who can hold down forward roles for us."

Fremantle recruiting manager Brad Lloyd on Tanner Smith: “He's a real quality person and a great competitor. He's just someone that we saw on his man at every contest. He's always spoiling and he's got amazing speed and agility for a guy who is almost 200cm.

“We've seen him consistently play a role and we think he can do that at the next level."

Essendon list manager Adrian Dodoro on Martin Gleeson: “A kid from Warrnambool but played for North Ballarat. He'll take some time. He's not a big boy, in terms of size, we think he will develop really well. He's a solid competitor with great skills and they're the things that stood out when we watched him.”