Northern Picks All Go First Round 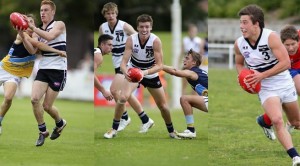 The Northern Knights had a successful NAB AFL Draft with three players selected on the night. Nick Vlastuin, Aidan Corr and Nathan Hrovat were all rewarded for impressive TAC Cup seasons, where all three were part of the AFL Victoria Metro Academy in 2012.

AFL Victoria Talent Manager Peter Kennedy was proud of the regions selections, especially with all three coming in the first round.

“We are extremely proud to have all three of our draftees taken in the first round. I believe that a player’s attitude, commitment and character have now become keys factors in the recruitment process and each of our players is well-rounded individuals that demonstrate these qualities, Kennedy said.

“We feel that a few of our other players were unlucky not to be picked up late in the draft but they still have another opportunity.”

Kennedy gave his thoughts on all three of the Knights recruits:

Nick Vlastuin: “Nick is an inside midfielder and/or defender. He has come the whole way through the Northern Knights program and is the type of player that ticks all the boxes.

What sets him apart from others is his competitive spirit. He doesn’t like losing whether it is personally or as a team and his ‘win at all costs’ attitude means that you would know in a one on one contest he will come out on top.

His stature and ability means that he could definitely play in the preseason NAB Cup games at the start of next year and hopefully make his AFL debut during the 2013 season.

He is quiet in nature but well respected by his peers and very much an on field leader. He was our Vice Captain as well as being honoured as the Vic Metro Captain.

Aidan Corr: “Aidan is a tall running defender that can move forward effectively. His speed and agility for someone well over 190cms is impressive and he did well at combine as a result.

“He had an exceptional year in Under 17’s and was awarded an AIS-AFL Scholarship without being seen at Nationals. However, he has seen his share of setbacks; breaking his arm and injuring his hamstring during this year which resulted in him missing some Under 18 Championship matches.

“He did finish the year well and being picked at number 14 proves the ability he has showcased.”

Nathan Hrovat: “Nathan’s rap sheet speaks wonders of his ability; Captain of the Knights, Club Best and Fairest, second in the TAC Cup Coaches Award, third in the Morrish Medal and MVP for Vic Metro.

“If I was to sum Nathan up in one comment it would be that he leaves no stone unturned.

“He started preparing himself for the year in the first week of January, training on New Year’s Day and signing up at a gym whilst he was away on holidays.

“He may be challenged vertically but he has become a stoppage and clearance player and the improvement he has made on his aerobic endurance and winning the contested ball has set him apart from many people.”

After the draft, AFL clubs gave their thoughts on their new Knights recruits as well.

“He averaged 17 disposals across half-back in the National under-18 Championships and led his men by example with some fierce tackling and intercept marking.

“Significantly, Nick played some of his best football while representing the AIS-AFL Australian team in their Academy games against the bigger bodies of the Geelong and Box Hill VFL sides over the past two years.”

GWS National Recruitment and List Manager Stephen Silvagni regarding Corr and the GWS recruits: “We always said we wanted to select the best available talent and with six of the first 27 selections... we believe we have done just that," Silvagni said.

"We have recruited an excellent mix of midfielders, forwards and defenders and together with our existing talent makes for a very exciting future for the GIANTS.”

Western Bulldogs recruiting manager Simon Dalrymple on Hrovat: “ It's a legitimate thrill that he got to us. We originally had pick 28 (before the trade period), and we wouldn't have got him there. He's an outstanding young man, a great leader, wins the ball on the inside and the outside, and we think the mix with Luke Dahlhaus and Nathan both going onball and forward will be outstanding. He's one of the most driven individuals I've seen. We knew a number of clubs in the mid-teens were interested ... so it was a really nervous wait.”