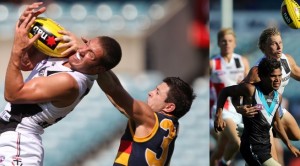 As we gear up for week two of the AFL’s NAB Cup, we look back at the first weekend of the preseason competition that saw six 2012 TAC Cup graduates taking the field.

The first appearance of a 2012 TAC Cup draftee was Martin Gleeson who took part in the blockbuster between Essendon and Collingwood on Friday evening at Etihad Stadium. Gleeson was recruited by the Dons from the North Ballarat Rebels with pick 53 in the NAB AFL Draft. Only playing 34 percent of the match, Gleeson was able to amass four disposals whilst demonstrating his impressive foot speed across the ground.

Surprisingly, it was the interstate matches that saw the most former TAC Cup players take to the field. Both Nathan Wright (Dandenong Stingrays) and Josh Saunders (Geelong Falcons) represented the St Kilda Football Club on their trip over to Adelaide. Wright took part in both NAB Cup matches accumulating three disposals and three tackles. Saunders participated in the Clubs match against Port Adelaide and was able to match Wright’s stats in his single encounter.

However, it was two former country TAC Cup players that drew the most media attention in South Australia. Bendigo Pioneers recruit Oliver Wines – taken pick number seven the 2012 NAB AFL Draft – made his first appearance for Port Adelaide on the weekend along with former North Ballarat Rebel Jake Neade. Playing both NAB Cup matches, it was Wines game against St Kilda that saw his name mentioned in the best for the team, amassing eight disposals and one goal. Neade had seven disposals and 75% game time in his first match against St Kilda and joined Wines in the best players.

New teammate Tom Clurey from the Murray Bushrangers was selected by Port Adelaide to take on arch rivals the Crows. As a tall defender, Clurey gathered seven disposals whilst displaying his phenomenal endurance playing out almost the whole match.

One more former TAC Cup player made his first appearance for an AFL Club with Brad Crouch lining up for the Adelaide Crows. Crouch was recruited as a 17 year old to GWS in 2011 but was traded in the mini draft and unable to represent Port until 2013. The talented midfielder accumulated seven disposals in each match on Sunday.