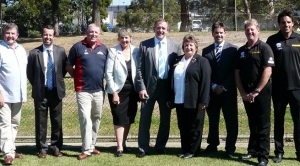 The Dandenong Southern Stingrays have received a substantial boost on the eve of AFL Victoria’s TAC Cup season after the announcement of a $1.25 million upgrade to their home base at Shepley Oval.

The Victorian Coalition Government, in partnership with AFL Victoria, the City of Greater Dandenong and Cricket Victoria, will provide funding to complete a redevelopment of the Shepley Oval Pavilion.

The project will include an overhaul of the pavilion’s ground floor to allow for a significant upgrade of the existing change-rooms, gymnasium, medical room, office space and amenities.

Minister for Sport and Recreation Hugh Delahunty joined AFL Victoria General Manager Grant Williams at Shepley Oval on Monday to make the announcement, which includes a contribution of $312,000 from the Victorian Government.

Williams said AFL Victoria was proud to partner the State Government and the City of Greater Dandenong in a project that would support a range of football programs, from grass roots to the talented player pathway.

“The Dandenong Southern Stingrays TAC Development Program has a proud history of developing talented footballers, as illustrated by the selection of Lachie Whitfield as the number one pick in the 2012 NAB Draft,” Williams said.

“The program also provides opportunities for a range of young players, many of whom go back to their local community club better for the experience.”

Williams said the redevelopment would also allow for the establishment of a Youth Girl’s Academy.

“This facilities upgrade provides on and off field development opportunities for Victoria's most promising under 18 female footballers,” he said.

“Female football is our fastest growing form of the game and Youth Girls’ football in particular has experienced growth of 109 per cent since 2009.”

“The current change rooms are 35 years old and the redevelopment will really go a long way to bridging the gap between our facilities and those at an AFL club,” Wheeler said

“We have about 400 boys on our books when you consider our academy and development programs, and all of them will enjoy the benefits of the upgrade.”

Work at Shepley Oval will begin in August and is due for completion before the start of the 2014 TAC Cup season.