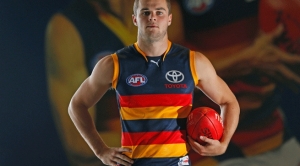 Brad Crouch knows the meaning of patience more than most. The Adelaide Crows midfielder is closing in on a long awaited AFL debut after a promising performance in the Round 3 of the NAB Cup.

For Crouch, a nod at the selection table will signal the end of a long 12 months after being ineligible to play at the elite level last year.

The boy from Beaufort was one of two players drafted in the 2011-mini-draft as a 17-year-old, and, under league rules, was restricted to donning only the West Adelaide jumper last season.

And while the Crows line-up for their Round 1 blockbuster against Essendon on Friday, March 22 won’t be known until for at least another week, Crouch is banging down the door with a string of solid games in the pre-season competition.

In his latest display, the inside midfielder collected 15 possessions and bagged a goal as the Crows held off Carlton at AAMI Stadium on Friday night.

Despite his lack of experience, Crouch looked at home in Adelaide’s star-studded on-ball brigade, winning plenty of contested possessions and releasing the Crows’ runners.

Across town and Port Adelaide are boasting their own former TAC Cup star with Ollie Wines already showing the form of a seasoned campaigner.

Wines’ ferocious attack on the football saw him named in the Power’s best players in their surprise win over West Coast in Alice Springs on Saturday night.

The hard-nut finished with 16 touches and looks all but guaranteed of a birth in Ken Hinkley’s side in Round 1.

Fellow TAC Cup star Jake Neade (North Ballarat Rebels) has also enjoyed a productive summer at the Power and again showed flashes of brilliance with a one-goal, 8-possesion game on the weekend.

The GWS Giants continue to blood the youngsters in their second pre-season in the AFL, with Lachie Plowman the latest to press his claims for regular season-action.

The classy midfielder picked up 13 touches, 12 of which were kicks, as the Giants succumbed to a near-full-strength Bombers outfit on Friday night.

Plowman, the third pick in the 2012 NAB AFL Draft was joined by former Calder Cannons teammate Jono O’Rourke (the number two pick) who came on as a sub, and Northern Knights export Aidan Corr.

On the other side of the ledger was lightly-built wingman Martin Gleeson, who found the footy seven times in the Bombers’ onslaught.