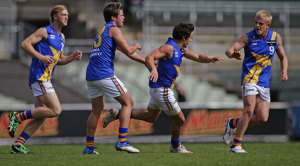 The Western Jets loom as one of the big improvers in the TAC Cup this season with a talented list that runs as deep as any in the competition.

One of the Jets’ strengths under new coach Torin Baker will be their array of key position prospects.

AIS AFL Academy member and Sudanese-born Duom Dawam promises to provide plenty of highlights this season, standing at 200cm tall and with a wealth of athletic attributes.

But Dawam will have plenty support with center half forward Mark Orr and key defender Harley Armstrong-Western sure to be looked at by AFL recruiters.

Orr has been selected in the preliminary Vic Metro Academy squad for the NAB AFL U18 Championships, alongside teammate James Sicily, who excelled as a bottom-age player last season.

“Liam is a classy left-footer from Bacchus Marsh and has huge potential,” Sexton said.

“Jake, who is the brother of Gold Coast’s Trent, is a skillful on-baller and was pretty solid for Vic Metro in last year’s National Titles.”

McKenzie will be joined by Harley Walshe, David Iaccarino, Daniel Burton and Ajdin Elkasovic, who all turn 19 this year and will give the Jets plenty of experience to rely on.

Sexton said the Jets will be captained by the highly regarded pair Brett Bewley and Harrison king.