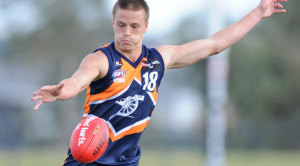 A host of familiar names are expected to lead the Calder Cannons’ charge under new coach Andrew Jago this year.

Harrison Taylor, the son of commentator Brian Taylor is another Cannon with good pedigree but unfortunately his father fell three games short of enabling him to qualifying as a Collingwood father/son selection later this year.

The Cannons’ 2012 campaign concluded in the first week of the finals series but was put in perspective with seven players selected in the NAB AFL Draft - including the second and third pick Jono O’Rourke and Lachie Plowman.

Cannons talent manger Ian Kyte said this year they were looking for big things from 19-year-olds Jake Owen and James Ferry, a key defender recovering from a knee reconstruction.

AIS AFL Academy members Jake Lever and Peter Wright headline a long list of bottom-age talent and have been included in the preliminary Vic Metro squad, alongside Cooke and Touk Miller.

The Cannons meet the Northern Knights this Sunday in the opening match of the season. Kick-off is at 10am at Visy Park.