Metro Round kicks off TAC Cup 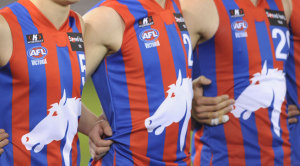 After a long hot summer the TAC Cup season is finally upon us with a big day of action at Visy Park.

The Calder Cannons and the Northern Knights kick things off with the first bounce at 10am, before reigning premiers the Oakleigh Chargers take the field against the Eastern Ranges at 12.30pm.

The last match on the card will see the highly rated Sandringham Dragons pitted against a tough Western Jets side.

The three matches offer a tantalising spectacle for onlookers with the chance to catch a glimpse of the best metropolitan talent in Victoria all on the one day.

Almost every member of the preliminary Vic Metro Academy squad will be in action, striving to impress selectors and the large contingent of AFL recruiters expected to attend.

Included in the highly talented group are eight members of the AFL AIS Academy who will play in Round 1 before gathering for a tour of Europe.

Vic Metro high performance manager Anton Grbac said it was a great opportunity to see the most highly rated kids from the metropolitan regions at their peak.

“We’ll have some of the state’s best midfielders, and key position players going head-to-head with one another,” Grbac said.

“AFL recruiters will be there sharpening their pencils, trying to find out more about the kids they know and trying to discover others they might not have seen.

“The AIS guys will play this week and then be missing in action for a few weeks, so it’s one of the best chances recruiters will have to see them perform in the TAC Cup.”

Grbac said one of the most exciting aspects of the day was watching some of the lesser known kids press their case for selection in the Vic Metro trial games.

“We’ve got a preliminary squad of 35 players and that will swell to 56 before the first practice game. That means 21 boys have the chance to play well and put their names into the mix.”

“There is always players that have had big pre-seasons,  and might have had injury worries in the past, that can really grab the attention of selectors with a strong showing in the opening few weeks of the season.”

Click the links below to see the season previews of each region: