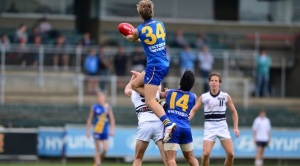 The Western Jets pulled off a stunning win in the last few minutes of their game against the Northern Knights, victorious by seven points last Sunday at Visy Park as Damian Gibson reports.

The Jets led at every change, and controlled the game right up until three quarter time. In the final term the Knights hit back hard, levelling the scores with five minutes to go. But Western Jet Jason Castagna bobbed up to roll a goal through from 30 metres out after a rushed behind to seal a Jets win 17.7.109 to 15.12.102.

The two midfield’s battled it out all day with the Western Jets onballer's coming out on top during the first three quarters. The Knights midfield then took over, and almost pulled their team over the line.

Two players who were impressive throughout the match were the Western Jets ruck/forward duo of Daniel Burton and Mark Orr.

Burton rucked for the majority of the first quarter and gave opportunities to his midfield as well as moving around the ground well. At times the ruckman showed amazing agility for someone of his 190cm frame. Later in the game he went forward and kicked two goals showing a flexibility that surely will be noticed during the course of the season.

Orr also was good in the ruck but dominated in the air at centre half forward and centre half back when roaming around the ground due to his massive frame and great hands.

The dominance in the ruck and competitiveness in the midfield allowed for the ball to move into the Jets forward fifty regularly where small forwards Mitchell Norton and Pele Manivong were productive Both made the most of their opportunities kicking three goals each.

However it was Norton who was close to best on ground racking up numerous disposals through the midfield and across half forward, and showed a maturity and decision making ability beyond his years.

These efforts pleased Jets coach Torin Baker at three quarter time, however the Knights came out to play after the last break and almost stole an unlikely victory on the back of a midfield who had worked hard all day but came to the fore in the fourth quarter.

Players like Billy Murphy, Liam Hunt and Josh Turner started to grow in confidence as they hit targets, broke tackles and showed run that the Jets found hard to keep up with for 30 minutes.

Murphy’s attack on the ball especially was impressive, considering his size standing at 170cm and 63kgs.

Matthew Haynes was a great forward target for the Knights, carrying on his good goal kicking form from the week before, kicking another two goals in this game and was amongst the best for the Knights especially in the second half.

It was the Jets however who weathered the storm in the final minutes of the game both from the heavens and from the Knights, and when Castagna’s goal went through it was all but over in what proved to be a fantastic game from the siren to siren.