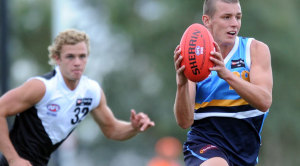 The Bendigo Pioneers are just two miserly victories away from matching their disappointing 2012 season after defeating the North Ballarat Rebels at Craigieburn on Saturday.

Despite a slow start the Pioneers took control after quarter time to post a comfortable 42-point victory 12.18.90 to 7.6.48.

Elusive wingman Harry O’Meara booted three goals, including two from beyond the ark, while key forward Alex Hywood kicked three of his own to lead the Pioneers’ charge.

But the duo were among many Pioneers to press their case for selection in the Vic Country squad for the NAB AFL U18 Championships.

The Pioneers' back six were terrific from the first bounce and their work was critical to withstanding the Rebels' early surge.

With the wind behind them, the men in black and white snared the first two goals of the match while the Pioneers struggled to find their feet.

But while their forwards faltered in front of goal, the Pioneers’ defence led by Josh Cakitaki, Jordan Mangan and Trent Bacon stood firm, wrestling back the momentum and ensuring the margin was just eight points at the first break.

After some encouraging words from coach David Newett, the Pioneers emerged a different side in the second term, piling on six goals to seize control of the match.

O’Meara was the standout, capitalising on the in-and-under work of captain Jacob Chisari to bag his first with a stunning effort from beyond 50.

His second major 10 minutes later was just as impressive and, with Blake O’Halloran and Hywood joining in the fun, the Pioneers had a handy 16-point half time lead.

Despite resuming with the breeze at their backs the Rebels could do little against the staunch Pioneers defence with Jayden Brennan’s classy snap for a long-range goal one of the few highlights.

Acting captain Lachlan Cassidy and Louis Herbert did their best to get the Rebels firing but apart from cameos from live-wire Keegan Mellington and half-back James Richards, they had little support.

While the Rebels never gave up, a 30-point deficit at the last change was always going to be too much and the final margin of 42 points was probably fitting of the gap between the two sides.

The Pioneers travel to Shepparton Saturday to take on the Murray Bushrangers while the Rebels face an impressive Geelong Falcons outfit in Warrnambool on Sunday.