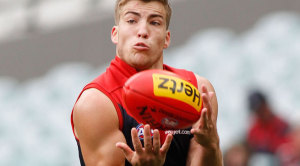 This year’s crop of TAC Cup draftees have wasted little time in making an impact at AFL level with several eye-catching performances in Round 1.

Father-son selection Jack Viney was arguably Melbourne’s best player as the Demons copped a heavy defeat at the hands of Port Adelaide.

The Oakleigh Chargers export was desperate and decisive in his first taste of AFL action, setting an example for his more experienced teammates.

The inside midfielder kicked a goal and racked up 16 kicks, six handballs and six clearances, clearly enjoying the cut and thrust of the big league.

On the other side of the ledger and just as impressive, was the debut of former Bendigo Pioneers skipper Ollie Wines.

Wines was instrumental in helping the Power win the midfield battle, and finished with 24 possessions, including 16 contested, and a goal.

The hard-nut is already one of the favourites for the NAB Rising Star Award after securing the Round 1 nomination and appears a key men in coach Ken Hinkley’s plans to scale the ladder this season.

Also making his debut for the Power was live-wire Jake Neade.

The former North Ballarat Rebel might be one of the lightest players in the competition but his speed and ability to dodge defenders saw him contribute significantly in the Power’s big win.

Neade collected 11 disposals and applied plenty of forward pressure to show he’ll be one to watch this season.

The Giants showed plenty of fight in their loss to reigning premiers the Sydney Swans on Saturday and Whitfield and Plowman were in the thick of it.

After a nervous start the number one and number three picks from the 2012 NAB AFL Draft settled in to the match and gave Giants’ fans a glimpse of the future.

Whitfield finished with 15 touches, and Plowman 14 as the Giants fell 30-points shy of the Swans in the Battle of the Bridge.