Dragons and Knights fight out draw 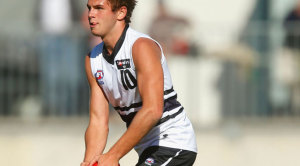 It was a game that deserved a thrilling finish, it just wasn’t the ending the Sandringham Dragons, nor the Northern Knights, were hoping for, writes David O'Neill.

After more than 100 minutes of enthralling football at Craigieburn on Sunday, the Dragons and Knights were left stranded on 71 points apiece.

While the Dragons’ 9.17 score line pointed to a missed opportunity, both sides were guilty of wasting their chances in an exhausting final term.

With the breeze at their backs it was the Knights 10.11.71 who looked to be finding the edge in the dying minutes, but the match-winning goal never arrived.

Jesse Tardio, who was one of the Knights’ best, sprayed two shots in the last quarter, unable to master the tricky breeze and drag his side over the line.

At the other end it was Karl Amon who was first the hero, and then the villain after goaling to help the Dragons capture the lead, but then failing to extend it with another set shot minutes later.

But neither team deserved to walk away with the emptiness of a draw after four see-sawing quarters that produced several eye-catching individual performances.

Dragons’ forwards Max Hayes and Alexander Spencer were the first to leave their imprint on the match with their strong marking a feature of the opening term.

But both squandered shots on goal and, despite enjoying the benefit of a strong breeze, the Dragons trailed by 5 points at the first change.

Things began much the same way in the second quarter with Tom Langdon’s dominance in the middle failing to result in scoreboard pressure.

The Dragons on-baller finished the half with 19 possessions but it was the Knights who enjoyed an 8-point buffer at the main break.

A team of contributors might be the best way to describe the Knights, who rely on the efforts of many rather than one or two.

While Josh Turner, Tardio and Jayden Short worked hard around the stoppages, captain Jake Kalanj and Kyle Langford were impressing on the flanks.

A 50m penalty, one of a number for the match, saw the Knights leap of out the box in the third term with an early goal before the Dragons finally found their range.

Three on the trot, including one from Langdon and a monster roost by Nathan Freeman had the Dragons in the lead and threatening to run away with the match.

But the Knights refused to yield and their ability to defend was never more apparent than in the dying seconds of the term.

A 40m chase down by Josh Iacobaccio, who hauled in his Dragons’ opponent just as he was about to launch his side into attack was symbolic of the desperate final quarter to follow.

After controlling the opening minutes Knights' forward Matt Haynes put in his contender for goal of the day with a 60m bomb that never looked in doubt.

But just as the Knights looked headed for victory, inaccurate kicking intervened, leaving both sides to ponder what might have been.

Hayes finished with two goals and was an ever present danger for the Dragons, while Langdon collected a game-high 33 touches in a best-on-ground display.

Zachery Merritt was another to impress, lifting in the second half and finding plenty of the ball in close.

Jordan Perry was one of many solid performers for the Knights on a list that also included Tardio and Sam Switkowski, while at the back Julian Soccio punched above his weight in an engrossing battle with Hayes.

Both sides have the bye next weekend as the TAC Cup’s six country regions battle it out in Bendigo on Saturday.