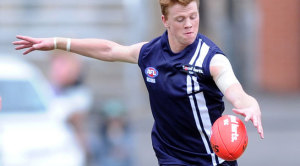 The Geelong Falcons have stamped their authority on the TAC Cup competition with an emphatic 65-point victory over the Dandenong Southern Stingrays on Saturday, writes David O'Neill

The Falcons are the only undefeated side after the first  three rounds of the season and, with a host of stars set to return in the coming weeks, are the early favourites for the premiership.

Despite missing four of their best due to the AFL AIS Academy European tour, the Falcons were clinical in their 18.10 (118) to 7.11 (53) win over the Stingrays in the final match of Country Round.

Mobile forward Fraser Fort impressed for the third consecutive week, using his height and agility to continually outpoint his opponent. Inaccurate kicking again stood in the way of a complete performance but Fort has emerged as one of the most difficult match-ups in the competition.

The big man was one of nine Falcons to bag majors with fellow talls Scott Dixon, Hugh Goddard and Patrick McCartin bagging two each, and midfielders Matthew Boag, Doug Bond and Jacob Sharp also finishing with a two of their own.

Boag was arguably the best of the lot, using his mature body to continually win the ball in close and also displaying the ability to use it on the outside.

The Falcons looked a class above from the opening bounce but a two-goal cameo from agile Stingrays forward Tom Lamb kept their lead to just 13 points at the first change.

It was as close as the Stingrays would get for the rest of the afternoon.

The Falcons piled on the first three goals of the second term, with Aaron Christensen’s clever chip to Goddard running into an open goal the highlight of 15-minute period of domination.

The Stingrays, in contrast, had little to savour until an inspiring run-down tackle from Josh Pickess resulted in a goal to Nathan Gardiner that helped keep the margin under four goals at the main break.

The momentum though was short lived, with the Falcons kicking 10 goals to three in the second half to take complete control of the contest.

Zac Jones competed tirelessly and was easily the Stingrays’ best, while Daniel Capiron showed glimpses of his prodigious talent in his first game back from injury.

The Falcons now have the luxury of a two-week break before tackling the Oakleigh Chargers on Saturday April 27, where AFL AIS Academy members James Tsitas, Lewis Taylor, Darcy Gardiner and Nicholas Bourke are expected to be available.

The Stingrays also enjoy a rest next week before they get another chance to shine when they take on the Western Jets on Sunday April 28.