Power too good for Bendigo 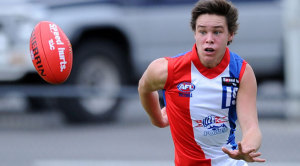 Gippsland Power has sent an ominous warning to the competition with 105-point victory over the Bendigo Pioneers on Saturday, as David O'Neill and Darren Edmondston.

Harry Conway was the sinning light for the Pioneers with two goals and a hand in two more, while the Power had a team full of contributors.

Windy conditions at Queen Elizabeth Oval confronted the two sides for the first game of Country Round, but it mattered little to the Power.

While the Pioneers struck first through Bill Evans, the Power responded through three first-term goals to key forward Josh Scott to seize a 14-point lead.

Jordan Cunico continued to gather possessions at will in the second, sending the Power forward, where crowd-favourite Alex Saunders kicked his first of two for the quarter.

All the momentum was with the Power and with goals to Brenton Rees, Declan Keilty and another to Scott, the visitors headed into the main break with a 44-point lead.

The Pioneers showed some fight in a free-flowing third term, with goals to Harry Conway, Brandon Spurr and a clever snap by Alex Hywood, but they couldn’t stop the rampaging Power.

Nick Stevens moved Ben Kearns forward and he responded with three goals for the term.

Alex Carr was another doing plenty of damage and when his long-range shot found its mark, the Power had seven for the term and a commanding 69 point-lead at three quarter time.

The final term began as the third finished with the Power completely outclassing the Pioneers.

Both teams enjoy a rest this week as the six Metro regions take centre stage.