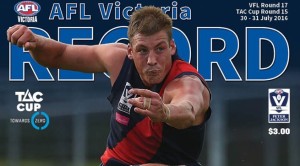 Missed getting a copy of the TAC Cup Record on the weekend?

-      A feature on Richmond VFL captain Sam Darley, who surprised even himself when he became the club’s leader this year;

-      A story on Bendigo Pioneers bottom-ager Jarrod Brander, one of six players at the club who return from attending school in Geelong to play TAC Cup football in their home region;

-      VFL News, which chats to Nick Laurence, who will this week become the first boundary umpire to achieve VFL life membership;

-      TAC Cup News, which looks at how recently retired Richmond player Troy Chaplin will take the head coaching reins at the Oakleigh Chargers this week;

-      Stats Central, which examines how the Eastern Ranges have steadied their season in the last two weeks with no-nonsense, direct ball movement, as well as how the VFL Tigers’ toughness dealt a huge blow to the Box Hill Hawks’ finals chances last week;

-      The weekly AFL Victoria Record quiz which gives you the chance to test your knowledge of all things VFL and TAC Cup.

Click HERE to view the Round 15 TAC Cup Record.