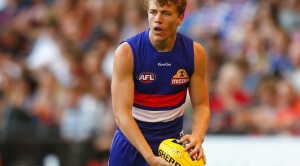 The 18-year-old midfielder was drafted to the Western Bulldogs in the 2012 NAB AFL Draft, and made his AFL debut in Round Four and as played four AFL games in his first season.

Against the Gold Coast Suns last Saturday at Metricon Stadium, Macrae had 26 touches – 13 kicks and 13 handpasses – and four tackles.

“Jackson is a young person who understands he has talent, and has worked very hard at improving his craft.

“We know Jackson is such a balanced and driven young man and he will continue to build on his early progression as a footballer — this nomination is just one stepping stone to a really good career, and shows he was a great selection by Simon Dalrymple and his recruiting team,” he said

He was recruited from the Kew Rovers, the Oakleigh Chargers and Carey Grammar in Melbourne. He represented Vic Metro in the 2012 NAB AFL Under-18 Championships.

The 2013 NAB AFL Rising Star winner will be awarded the Ron Evans Medal and a $20,000 personal investment folio and a dedicated personal banker, courtesy of NAB.