Vic Metro out to defend title 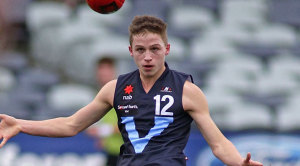 Victoria Metro will head to Brisbane this weekend, desperate to begin its NAB AFL U18 Championship campaign with a victory over Queensland.

With an eye on giving every member of the squad a chance to shine, all 39 players will take part in at least one match over the first two rounds.

“The first two games against Queensland and NSW/ACT we want to give everyone a chance,” Vic Metro coach Martin Allison said.

“It allows us to make an assessment of our best team and to pick a side on form for the remaining matches.”

A whopping 10 players from the Eastern Ranges are in the final squad, including captain Ben Cavarra and key forward Tom Boyd.

Boyd was one of Vic Metro’s better performers at the Championships in 2012 and could be joined by fellow tall Max Hayes in a potent forward line this year.

Hayes is one of nine players from the Sandringham Dragons to make the cut, joining the likes of midfielders Josh Kelly and Cristian Salem.

Another strength of the squad is the number of versatile types that will give coach Martin Allison plenty of room to move throughout the six-week campaign.

Marcus Bontempelli (Knights), Tom Cutler (Chargers), Daniel McStay (Ranges) and Jake Owen (Calder Cannons) have all proved their ability to play in a number of positions and loom as key components in the Vic Metro side.

Cannons star Jake Lever appears likely to command a key defensive post while the likes of Hugh Curnow (Knights) and Aidan Franetic (Chargers) will add a dose of class in the forward half.

Another player to watch is 210cm ruckman Angus Milham (Chargers) who is likely to get first crack at the centre bounce.