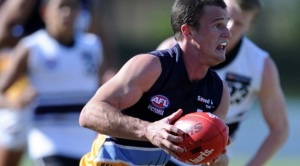 AS Oliver Wines continues to stake a claim for the AFL’s NAB Rising Star honour, spare a thought for Sam Heavyside.

Heavyside and Wines were once teammates, they came through the Bendigo Pioneers program together.

Two seasons ago when both were bottom age players, it was Heavyside that captured all the headlines when he won the Pioneers’ best and fairest.

The 2012 season began as the previous year had finished. Heavyside was one of the club’s best players and he was on track to represent Vic Country in the NAB AFL Under 18 Championships.

But, about this time 12 months ago, fate stepped in. It delivered a cruel hand to Heavyside as he broke a small bone in a foot in the lead-up to AFL Under 18 Championships.

Not only did it erase Heavyside’s dreams of representing Vic Country, but also his season and with it hope of being selected at any of the NAB AFL Drafts.

Bendigo coach David Newett said the Pioneers recognized that Heavyside deserved a chance to pursue his AFL ambitions with another season with the Pioneers.

“To win the best and fairest as a bottom age player, he’d attracted interest from (AFL) clubs so we knew he has draftable attributes,” Newett said.

But, Heavyside suffered a setback pre-season this year, which caused him to miss the first three rounds.

Heavyside immediately displayed his talent with two best-on-ground games for Bendigo, the latter in the Pioneers’ 14-point win against reigning premiers Oakleigh Chargers where he was really dominant.

“It’s great to see Sam come back and show what he’s got to offer,” Newett said.

“Missing the start of the season hurt him in a number of ways, but I think he’s going to show that he has enough class and talent to put himself back on the radar, especially if he keeps producing like he has in the first two games he’s played.”

What Newett likes about Heavyside is that he’s not a one trick pony.

“Sam has shown the capacity to go forward and he’s good over head for his height,” he said.

“He’s very good around the stoppages, he’s clean, a very good in and under player.

“He just wins his one on one contests. Sometimes you think ‘how is he going to win this’ and he just goes hard and doesn’t let his size impact on the contest.

“There was a contest against Oakleigh where he took a bigger fella on and just won the ball.”

Sam Heavyside would like nothing more than to be sharing the spotlight this time next year with his ex-Pioneers teammate.