Rebels deal with year of change 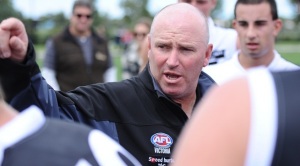 HOW dramatically and quickly things can change.

This time last year North Ballarat were perched second on the ladder with a 6-1 record and with finals beckoning. Fast forward and a win, let alone finals, appear light years away.

North Ballarat is cemented in the TAC Cup cellar, still searching for their first win.

Coach David Loader is seemingly forever being quizzed as to what's happened.

Loader noted there are so many entwined factors that have conspired against the club this season there is no single explanation.

For openers, a couple of players were involved in the AIS/AFL Academy tour then St Patrick's College, Ballarat, took an overseas trip, which took with them 14 Rebels players for the first three rounds of the season.

As Loader explained that left the Rebels about 16 players short on top of some players having exited the program to concentrate on other sports and then there's been a run of injuries.

"A lot of the public perception is 'hey you guys have been really good the last couple of years and you usually are a strong competitive unit, why aren't you winning games'," Loader said.

"People look at the ladder and say 'you must be down and out, and worried about this and that.

"In a way, I've enjoyed coaching as much or more than ever. We are all really being challenged as to how we are going to get a group that is really struggling back on track.

"I've got a saying that you learn more about yourself sometimes in adversity.”

With football, particularly in the TAC Cup so cyclical, depending on the relative strength of top or bottom age players, results can be volatile season to season.
As a result, Loader finds himself and his coaching staff working with a totally different group of players from last season.

Out of the Rebels top age players, a third have never been involved in a TAC Cup program before.

"We are really low on players who have played TAC Cup before. There was a game earlier in the season where we only had 28 games of TAC Cup footy across the whole team," Loader said.

Loader believes these situations provide a really good insight into the character of not only the players but all those around the club.

For all the disappointment associated with a 0-6 start, Loader said he can't fault the enthusiasm of the players or their willingness to get out on the track and work hard.

"The kids are putting the hard work in and they're developing," Loader said.

"Provided we can continue to take steps forward, I'm happy and the results will come."