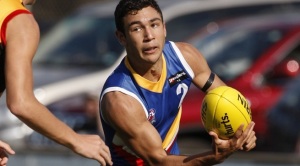 MANY things set Ben Cavarra apart from the pack.

One of the most telling is that Cavarra is just one of four players in their bottom age level to win a best and fairest at Eastern Ranges.

How does Sam Mitchell, Rory Sloane and Jonathon Patton resonate as the other triumvirate?

Impressive company, but those who know Cavarra, the captain of Ranges, are not surprised.

Ranges Talent Manager Anthony Parkin, an unabashed fan, noted that 55 of the 58 players who voted, selected Cavarra as captain.

Cavarra described it as a “huge honour” to be mentioned in the same breath as Messrs Mitchell, Patton and Sloane. “They’re obviously super stars in the AFL,” Cavarra said.

For all that, Cavarra, 173 cm and 69kg, has had to rebound from adversity, one feels largely because of his size.

It’s as if every time Cavarra and players of a similar stature play expectations are unfairly placed upon them – they’re marked tougher than others.

Cavarra was overlooked for the Vic Metro squad in the AFL Under 16 Championships. He was told he needed to work on his endurance, among other things.

“It was pretty disappointing at the time. I was told I needed to work on a few things so I went back to Eastern Ranges and really worked hard on all those things,” Cavarra said.

The major thing was his fitness. He took on board the advice and lifted a 12.4 Beep Test time to 14.8 this year.

And, that improvement coupled with his continued ability to find the football, use it to advantage and provide inspiration to his teammates has seen him named in the Vic Metro squad for the NAB AFL Under 18 Championships.

Vic Metro opened its campaign last weekend when it travelled to Brisbane to play Queensland. Cavarra stood out with a best on ground 35 disposal game.

“Fitness at TAC Cup is one thing, but the National Championships is up another level and so I really worked on making it my biggest focus in pre-season,” Cavarra said.

“I really needed to and that’s what I worked on.”

“I’m rapt to get the opportunity represent Victoria in the Nationals, I mean it is a huge honor.

“Obviously, I have a huge respect for all the players I play against and now to play with a lot of them is going to be a huge thrill. I’m really hoping I can contribute to Vic Metro.”