Rebels keen to impress in Horsham 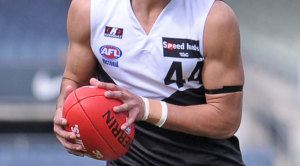 The town of Horsham will experience the best underage football competition in Australia this Sunday at 12pm when the North Ballarat Rebels again host a TAC CUP Home game at the Horsham City Oval against reigning premiership winners, the Oakleigh Chargers.

The Rebels annually take TAC Cup games throughout the region which gives the regional football followers from the Warrnambool, South West and Wimmera communities the opportunity to view and experience the region’s best underage AFL players.

The Wimmera area has a rich history of producing quality AFL and Rebels Players and many young hopefuls will be on display this weekend which again will encourage a large crowd of attendance as per previous years.

The Rebels are coming off a disappointing loss last week against the Dandenong Stingrays in Round 7 of the competition and will need to have all cylinders firing in this game to take it up to the Chargers who are sitting 5th on the ladder.

The Rebels are still looking for their first win of the season and believe they are improving each week on a win is not far away for the young team. Shane McAufliffe and Sam Glover will make their debut for the Rebels this week, with Louis Herbert and Kyle Hendy amongst other key inclusions.

Hertbert is returning after missing last week due to playing for Vic Country against the NT in the opening game of the NAB AFL U18 Championships whilst Kyle Hendy has made a quick recovery from an Ankle injury sustained 2 weeks ago.