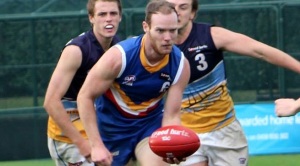 Both teams had struggles in the first half trying to handle the ball in the tough wet conditions and marks were hard to come by. Neither side really got any advantage for the first half of the first quarter either with Bendigo going goal for goal, but it was the Ranges who took the chances and were able to convert the shots.

The Pioneers started well enough, kicking a few goals in the first quarter and bringing about some good effective plays where Alex Hywood took a leading role, but the Ranges quick got on top late in the second term.

The defending of the Eastern Ranges was spot on and as they repelled any time Bendigo even skimmed over the 50-metre line. Thomas Boyd at the other end dominated by kicking one key goal against the run of play in the second quarter.

It was Mitchell Honeychurch who stood out from the Ranges, taking advantage of any clear space that opened up. In the end he kicked four goals for the game.

As the game wore on, Bendigo struggled to find the goals, except for one good long kick by Matthew Rix late in the final quarter.

Eastern Ranges coach Darren Bewick was being low key with the win, with a feeling that the team could improve as they sit second on the TAC Cup ladder going into the Development weekend off.

“I think we just persisted at playing the game on our terms.

“We defended really well and tight.

“Once we stopped over-possessing the ball and we moved the ball a bit quicker, we were able to not expose them, but get the game on our terms and kick some score.”