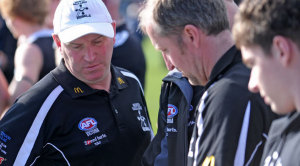 North Ballarat Rebels have recorded their first win of the season in outstanding fashion, defeating reigning premiers Oakleigh Chargers by 71 points in Horsham on Sunday as Joel Dwyer reports.

A committed Rebels outfit turned in a complete four quarter TAC Cup performance to produce the biggest upset of the round, surprising the Chargers with their pressure and intensity around the ball.

A fired up North Ballarat opened the game with a bang, kicking the only three goals of the first quarter to lead by 18 points at the first break.

The Rebels kicked the opening three goals of the second term to lead by six goals, before Oakleigh managed two late goals to reduce the margin to a manageable 25 points at half time.

North Ballarat came out determined to avoid a second half lapse, slamming on ten second half majors to Oakleigh's three, to run out rampant victors.

North Ballarat coach David Loader was particularly pleased with the even contribution from his group.

This was most evident in the fact only four players failed to gather ten possessions for the match, and six players booted two goals apiece.

"Our second tier players and the new guys we brought in had an impact as well which was so important for us today."

Loader believed the win was vindication for the hard work put in by the coaching staff during a tough opening to the season.

"It certainly gives you some faith that what we are doing is right and the kids are starting to believe in themselves," Loader said.

"The boys turn up and try their guts out every week. It's just that today was the first time it's really clicked and we've had a ten goal win which is fantastic."

Loader reserved special praise for the likes of Herbert, Hendy, Hoy, Webster and Cassidy for leading the way in a great team performance.

The TAC Cup has a bye this coming weekend, before the Rebels will aim to make it two on the trot against Gippsland Power in Morwell on Saturday, June 15.