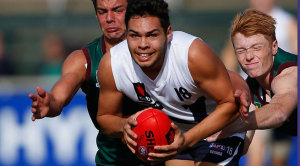 Victoria Country has made it two wins from two matches in the NAB AFL U18 Championships with a commanding 63-point victory over Tasmania at Visy Park today.

The men from across Bass Straight proved a worthy opponent for three quarters, eventually succumbing to Vic Country’s wealth of midfield talent 15.17 (107) to 7.2 (44).

Geelong Falcons midfielder James Tsitas was best afield with 32 disposals and goal of the day, a half-volley strike from 20m out that Tim Cahill would have been proud of.

Tasmania’s resistance was led by midfielder Eli Templeton (30 touches) and the classy Kade Kolodjashnij (24) who both caused plenty of headaches for the home side. Toby Nankervis was also pivotal in the ruck and around the ground with his strong marking a feature of the visitors’ play.

Vic Country’s midfield strength was obvious from the outset with Tsitas and Taylor prominent at the stoppages and Willsmore capitalising with two first quarter goals.

A 24-point lead at the first break looked ominous but some staunch defence from Tasmania and some inaccurate kicking from Victoria Country saw the margin swell to just 28 points at half time.

Two majors in two minutes to Geelong Falcons centre half forward Patrick McCartin helped Vic Country regain their control in the third term, a strangle-hold they would enjoy for the rest of the match.

Lively half forwards Jarman Impey (Murray Bushrangers) and McCartney showed their exceptional skills with moments of brilliance, while Zak Jones (Stingrays) was damaging off half back.

A 38-point lead at three-quarter time was always going to be too much for visitors, but Taylor made certain of it. The on-baller was everywhere in the last term, showcasing his skills on both the right and left foot to challenge Tsitas for best-on-ground honours.

Bushrangers’ clearance king Nick Holman was another to impose himself on the contest, lifting his possession tally to 22 before the final siren and helping Vic Country run out comfortable winners.