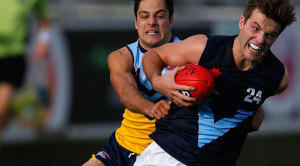 Six goals to Tom Boyd and a commanding performance from ruckman Michael Apeness have fired Victoria Metro to a 70-point win over NSW/Act today.

Boyd and Apeness, both Eastern Ranges exports, proved too big and strong for NSW/ACT’s talls, with Boyd’s six majors, and Apeness’ 33 hit-outs pivotal in the win.

Classy left-footers Christian Salem and Karl Amon (both from the Sandringham Dragons) kicked three goals each, too often finding space in the forward half.

Another duo from the Dragons; Josh Kelly (26 disposals )and Nathan Freeman (21 and 8 clearances) were also key players, combining well through the middle with captain Luke McDonald (24). (Pictured above)

NSW/ACT were far from disgraced in the loss and had stars in Michal Gibbons (Murray Bushrangers) and Lloyd Perris, who finished with 29 and 26 possessions respectively.

Jake Barrett was another who could hold his head up high with 22 disposals and three goals, the last of which was kicked after the final siren to reduce the margin to 70 points.

In free flowing first quarter it was Metro who got the jump, enjoying a 20-point buffer at the first break, thanks to three goals to Boyd and the class of their midfield brigade.

But with star Jack Billings (Oakleigh Chargers) leaving the ground never to return, NSW/ACT managed to limit the damage, and the margin, to just 23 points at the main break.

The visitors refused to be intimated by Vic Metro’s talent, which was best illustrated when Barrett fought off opponents to win the ball before drilling one from 40m out mid-way through the term.

A classy running goal to Will Maginness sparked the home side in the third quarter, before Boyd add three more to his total and Aidan Franetic threaded one from the boundary on the three-quarter time siren.

The classy finish extended the hosts’ lead to 50 points at the last change but still coach Martin Allison demanded more.

In his first year at helm, Allison called on his chargers to lift their tackling pressure and suffocate their opponents, naming the players who had yet to register a tackle.

Whether it was his words on the weight of numbers, NSW/ACT allowed the flood gates to briefly open in the final term with Salem and Amon the beneficiaries.

Amon’s second was the highlight, slamming a low ball through the middle after Kelly had dodged and weaved his way past three opponents before releasing his teammate.

Vic Metro now travels to Pert next weekend to take on Western Australian in the first of the Division 1 encounters on Saturday afternoon.