Vic Metro - What the coach had to say 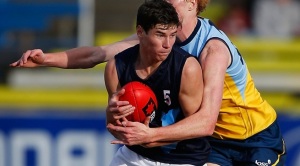 IT surprised few that Thomas Boyd would prove a headache for NSW/ACT in the last of the cross over division NAB AFL Under 18 championship matches.

After all, Boyd represented Vic Metro last year in the Championship where he kicked three goals against Vic Country.

And, of course, Boyd topped the TAC Cup goal kicking last year, an outstanding effort given he was a bottom age player.

With such a backdrop, NSW/ACT was always going to struggle to combat the 199cm Eastern Ranges power forward and that’s what panned out.

While Boyd was dominant, he was not alone. Sandringham Dragons teammates Christian Salem and Karl Amon each chipped in with three goals.

Vic Metro coach Martin Allison described Boyd was “pretty handy” as he provided a target whether as a leading target or in a contested situation.

He said Dragon Max Hayes also played well across half forward with his strong, contested marks and leading up the ground, creating space for his smaller, quicker teammates to capitalize.

“Max played his role particularly well. He allowed Tom Boyd to compete one out with his opponent,” Allison said.

Midfielder Nathan Freeman, another Sandringham player, racked up possessions and used the ball effectively as did Will Maginness.

Michael Apeness, a teammate of Boyd’s at Eastern as well as matching him centimeter for centimeter, also impressed Allison as he controlled the ruck with 33 hit outs.

“He rucked well and took some really good marks around the ground. He was quite pivotal to the game,” Allison said.

“We rested him late in the game because we are going to Perth on a six day break, but he was really impressive in the first half with his work rate and what he did around the ground.”

Fresh legs is a large component of how Vic Metro plan to tackle Western Australia at Paterson Stadium on Saturday.

“We just wanted to freshen him up so he could be right on a big ground,” Allison said.

“We will bring into the team some players with leg speed.”

Vic Metro has played 38 players in the first two Championship games, but will select its best available team.

Jack Billings, an All Australian last year, will need to pass a fitness test after receiving a knock on a knee early against NSW/ACT.

Billings aside, Vic Metro will take its best, freshest team west in search of what shapes as a Championship defining match.