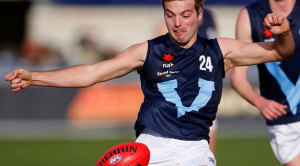 If Luke McDonald was already starting to turn his attention to next year, most would understand, writes David O'Neill

The 18-year-old has been all but guaranteed to be selected by North Melbourne under the father-son rule in the 2013 NBA AFL National Draft.

In fact, the classy midfielder already trains with the club once a week and enjoyed a full-preseason alongside the likes of Brent Harvey and captain Andrew Swallow last summer.

But before his AFL dream becomes reality, Luke, the son of renowned North Melbourne Football Manager Donald, has one last mountain to climb.

In his final foray into underage football, McDonald will join close mates Ben Lennon (Northern Knights) and Jack Billings (Oakleigh Chargers), in the Vic Metro jumper when the Division 1 matches of the NAB AFL U18 Championships begin this weekend.

With the added reasonability of Metro’s captaincy on his shoulders, the athletic midfielder with a nose for the hard ball, will venture across the Nullabor alongside his teammates for the important clash with Western Australia on Saturday.

And while McDonald admits his circumstances are very different for most of his teammates, who are desperate to impress the mob of AFL recruiters sure to be in attendance, his perspective is one of maturity and humility.

Just three minutes with young gun and you begin to understand why his peers love his company on and off the field, and why his coaches applaud his leadership.

“I suppose it is a bit different for me because I know we’re I’m going next year, and I’ve had the six months with North Melbourne and the experiences of the pre-season,” McDonald said.

“So for me it’s more about trying to get some consistency and some match-conditioning. On the field, I want to work more on the leadership side of things, setting a good example and getting around the boys.”

“Most of the guys are trying to get noticed and concentrating on getting kick whereas I’m lucky that I can take a step back and look at the big picture.”

While his papers have been stamped, McDonald still has to deal with the pressure of captaincy and his own lofty expectations.

“I’ve always been someone that didn’t mind a little bit of pressure. I enjoy the challenge of being captain and trying to stand up and lead the way.”

“I try and set the example on the field with the way I play and am really working hard at becoming a better leader off the field as well.”

After spending the first half of this season playing for the Kangaroos-VFL affiliate the Werribee Tigers, McDonald was a key figure in Vic Metro’s win over NSW/ACT last Sunday.

With the ability to find space in heavy traffic, the 188cm on-baller helped himself to 24 disposals and four clearances in the 70-point demolition.

With improving endurance and assured skills on either side of his body, McDonald is considered by many a ready-made AFL footballer.

But before he joins Brad Scott’s young midfield brigade, the teenager is focused on defending the title he helped Vic Metro win in last year’s NAB AFL U18 Championships.

“Last year we had a lot of guns but probably not quite the depth,” he said.

“This year we have a squad where every guy is capable of playing Division 1 football and the competition for spots is really intense.”