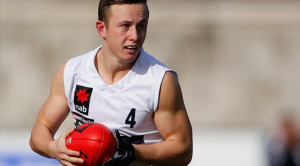 A poor first term has cost Victoria Country any chance of upsetting South Australia in the NAB AFL U18 Championships in Adelaide today, writes David O’Neill.

The hosts enjoyed a 20-point buffer at the first change and, despite Vic Country clawing within six points in the third quarter, the difference would prove pivotal.

Geelong Falcons defender Darcy Gardiner was pillar of strength at centre half back for Vic Country but when he limped from the field on the three quarter time siren, the visitor’s hopes were dashed.

Harvey’s third and fourth goals proved the only majors in a scrappy final term, leaving SA to enjoy a 34-point victory.

The class and ball-winning ability of Luke Dunstan and the work of Matt Scharenberg (27 disposals) at centre half back helped spark SA early, and with Orazio Fantasia bagging two goals, the home side was already well clear at the first change.

James Battersby was another to enjoy the better of the opening exchanges and only the work of Gardiner and rebounding defender Zak Jones(Dandenong Stingrays) kept the visitors within striking distance.

Vic Country coach Mark Ellis demanded his chargers go back to football basics at quarter time and they responded with an improved showing in the second term.

The forward pressure of Clay McCartney (Stingrays), Jarman Impey (Murray Bushrangers) and Alex Saunders (Gippsland Power), and the inside work of Nick Holman (Bushrangers) helped stem the tide and keep the half time margin to 22 points.

The visitors were in desperate need of a spark and Billy Hartung (Stingrays) was the man for the moment.

After keeping dangerous SA wingman James Aish to just four possessions in the opening half, the Dandenong Stingrays speedster ignited his side with 7 disposals for the quarter and several eye-catching runs.

But as good teams do, SA responded quickly and when Darcy Hourigan marked and goaled to finally get one back on Gardiner, the hosts had three on the trott and a 24-point lead at the last change.

Despite enjoying early opportunities in the final stanza, the margin would prove too much for the Vic Country to counter.

With few four quarter performers, Sandringam Dragons midfielder Zackary Merrett topped the stats sheet for the visitors with 19 possessions, while Holman (18) and Hartung (17) did their reputations no harm in the loss.

Jones, Gardiner and Fraser Fort (Falcons) were all fine contributors when the game was in the balance but in the end SA’s 14 more inside 50s overwhelmed Vic Country’s defensive efforts.